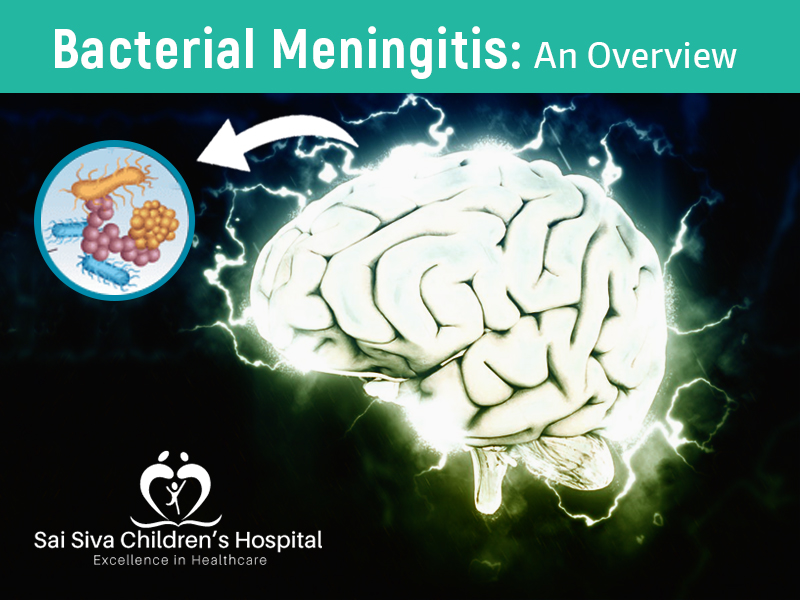 Have you heard about bacterial meningitis? Let us discuss some facts about it. Meningitis is a rare infection but very serious, it affects the delicate meninges membranes that cover the brain and spinal cord. There are different types of this disease which includes bacterial, viral and fungal. Bacterial Meningitis is caused by the different kinds of bacteria and it is commonly found in the environment, can also be in your nose and also in the respiratory system without causing any harm. Bacterial meningitis effects Children mostly between the ages of 1 month to 5 years. Bacterial meningitis is life-threatening and spreads easily to people in close contact.

Out of all cases registered for meningitis throughout the world, Most occur due to bacteria. Meningitis occurs when bacteria enters into the fluid surrounding the brain. Sometimes they enter directly when a brain surgery is done. Sometimes they make a way through small bones in our skull or carried through blood from an infection occurs in the body such as pneumonia (a lung disease). There are several species of bacteria which causes meningitis. The most common causes of  bacterial meningitis are as follows

Neisseria Meningitides (Meningococcus): It is a specific type meningitis caused due to bacteria Neisseria meningitides. It is also called as meningococcus and mostly seen in children under the age of 5. Usually, these bacteria cause upper respiratory infection but they may cause meningococcal meningitis when they enter into the bloodstream. This bacteria reproduce in blood and target the cells around the capillaries. This leads to mild blood leaks and forms pink, red or purple coloured rashes on your skin and resembles dot-shaped structure.

As the disease becomes severe the spots will grow larger and darker. Humans are the only host for spreading this meningococcal bacteria to others through respiratory and throat secretions, who are in close contact. The death rate goes down to 5 to 15% With early diagnosis and treatment. Symptoms associated with this type of meningitis are a headache, high fever, stiff neck, sensitivity to light etc.

Streptococcus Pneumonia (Pneumococcus):  Pneumococcal meningitis is caused by the bacteria Streptococcus pneumonia. About 40% of people carry this kind of bacteria found in their respiratory tract, sinuses, and nasal cavity and this bacteria are responsible for pneumonia, sinus, and ear infections. The bacteria spread through coughing, sneezing, sharing food etc. However, those bacteria manage to make a way and cross the blood-brain barrier and cause infection in the spinal cord, brain or fluids surrounding them.

Haemophilus Influenza (Hib):  This type of meningitis is caused due to a bacteria called Haemophilus influenza type b (Hib). These bacteria live in the nose and throat of humans causes no harm. It causes a problem only when you affected with viral infections, defected immune functions etc. However, these HIB germs spread to the body and rarely leads to bacterial meningitis when the bacteria reaches the brain.

It spreads through respiratory droplets i.e when someone who has the bacteria in their nose or throat coughs or sneezes. Once it is the leading cause of bacterial meningitis. Hib vaccine reduced the cases of this type of meningitis. It mostly occurs in babies and young children under the age of 5 and adults after the age of 65 years.

Symptoms associated with this serious form meningitis are a sore throat, painful swallowing, breathing through their mouth, a high fever, difficulty swallowing etc.

Listeria Monocytogenes: Here meningitis caused due to the bacteria Listeria monocytogenes. It is a pathogenic bacteria resides in food, including in processed meats, hot dogs, raw vegetables, fruits and in unpasteurized milk and cheeses etc. Listeria bacteria also live in soil, water, and animal faeces.

Pregnant women, infants under one month of age, and elderly people with weak immune systems are also at higher risk to effect with this form of meningitis. Pregnant women have a chance of developing listeriosis caused by these bacteria. This infection can lead to miscarriage, a stillbirth can pass to their newborns which result in neonatal meningitis.

Group B Streptococcus (GBS): Neonatal meningitis is caused due to Group B strep infection. infants can get it from their mothers during birth. This group strep can develop meningitis soon after birth.  To prevent passing group B Strep to their newborns, doctors give antibiotics to women during pregnancy.

However, GBS can occur in other age groups of children and adults also. GBS bacteria were commonly seen in the gastrointestinal tract( it is the part the body which includes the stomach and intestines that digests food) of men and women.

How To Treat Meningitis?

Avoiding a meningitis infection is a lot easier with the available vaccines. It is treated with a combination of antibiotics. The vaccines or antibiotics are given depending on the bacteria infected, considering age and other factors.

Haemophilus influenza type b (Hib) vaccine is recommended for children to prevent attacking from Hib bacteria. This Hib vaccine is given to infant babies at the age of 2,4,6 and 18 months. Doctors usually treat GBS with penicillin or other common antibiotics. Mostly treatment for this will depend on the type of infection caused by GBS bacteria. Sometimes people need to undergo for a surgery who have bone infections and with soft tissues.

Most of the meningitis cases are successfully treated with early diagnosis and treatment. If you are in close contact with someone who is suffering from meningitis or any symptoms resembles meningitis, you no need to get panic. Meet a doctor immediately and he will prescribe some antibiotics as a precaution.